Our work will enable us to study biomolecules in living organisms

Investigating biomolecules such as sugars or proteins in their natural environment is a scientific challenge. To be able to achieve this, researchers need to develop bioorthogonal reactions, which take place in living systems without interfering with their native biochemical processes. Not many such reactions exist and they are challenging to develop, as the natural physiological environment is sensitive to the reaction conditions. “We want to use masked precursors that remain inactive until we activate them with light. Using light, we can control the reaction both in time and in space,” explains new Experientia Foundation stipend award holder Athanasios Markos. “We want to develop completely novel reactions that will allow us to study biomolecules within the living organisms themselves. Achieving this could provide new insights into things like the mechanisms of diseases,” he adds. As of September 2021, Markos will investigate his chosen topic at the prestigious ETH University in Zurich, where he will use his stipend from the Experientia Foundation to join Professor Helma Wennemers’ group for a one-year research stay.

You are headed to ETH in Zurich, one of the most prestigious universities in the world. Looking back on your scientific career up to this point, what were the most formative experiences?
Sport was the thing that shaped me the most, even back in the days when I had no inkling whatsoever that I would have a career in science. I used to be a cyclist from an early age. Sport has a lot in common with science. Like science, it is a very competitive environment. Sport taught me not to give up easily: if things don’t go your way, it’s not the end of the world. There is always a second chance. At the same time, sport taught me to work hard on myself. If you haven’t done the miles, it’s going to catch up with you in the race. It’s exactly the same in science – if you don’t read the literature, if you skimp on the work in the lab, it’s very unlikely that you will get the results you need. That’s why I think my most formative experience was the instruction I received from my cycling coaches at high school. We wanted to achieve something. And it was mostly about the approach that we learned to adopt. If I look at my former team-mates, most aren’t earning their living through cycling these days, but they are all very successful in their respective careers.

As a cyclist you reached an extremely high level. You won the individual road race national championships and represented the Czech Republic in cycling for three years. At what point did chemistry enter your life?
There came a point where I had to make up my mind whether to continue as a professional cyclist or try something else. At that time, the training I was doing was very tough. And so I decided to go to university. In fact I had nothing to do with chemistry until university, where I actually came across it by coincidence.

Really?
Yes. For a long time I did think that I would make a living as a professional cyclist. When I started university, I had almost no experience with chemistry. I liked biology, so I enrolled at Palacký University in Olomouc, where biology was taught in combination with chemistry. But it turned out that chemistry was the subject that fascinated me so much that I stuck with it. Before university, we used to train 4–6 hours a day, and when I suddenly stopped cycling, I could devote all the hours that I used to spend training to my studies, to catch up on the things I hadn’t learned before. The first two years in particular were extremely demanding. On the other hand, the positive thing was that I was able to learn everything from the very basics.

So when did you realise that you wanted to focus on chemistry?
After my bachelor’s degree, I switched to organic chemistry. I joined an extremely likeable team at the Department of Organic Chemistry in Olomouc and really enjoyed working in the organic lab. By that point I had no doubts that I wanted to continue with chemistry. After graduating from Olomouc, I started my Ph.D. at the Institute of Organic Chemistry and Biochemistry of the Czech Academy of Sciences in Prague in Dr Petr Beier’s group. We focused on the development of novel organic reactions leading to fluorinated compounds, which could be used as new therapeutics.

You received the Experientia Foundation stipend award based on your project of developing new bioorthogonal reactions. What is your goal with this approach?
Our goal is to develop highly effective bioorthogonal reactions that would allow us to study biomolecules such as sugars or proteins in their natural environment: in cells or ideally directly in living organisms. Bioorthogonal reactions take place in living systems without disrupting the native biochemical processes. However, there aren’t many such reactions, and developing new ones is complicated by the constraints of the physiological reaction conditions such as the physiological temperature and pH, the aqueous medium, and the presence of multiple reactive functional groups. In this project, we plan to use masked 1,3-dipole precursors, which we will convert to reactive 1,3-dipoles in a targeted way using light. These will react with isonitriles, which are small and physiologically stable reagents.

What makes your approach unique?
Developing an effective bioorthogonal reaction is in itself quite a challenge. When we work in a test tube, we can vary the solvent, the temperature, and the pH, but in living organisms the conditions are predetermined. The most difficult aspect is to develop a reaction that doesn’t interfere with the physiological conditions but is still adequately effective. The use of isonitriles is probably the biggest advantage of the bioorthogonal reaction we are developing. These are very small, so if they are incorporated into a biomolecule, it is very likely that the biomolecule’s natural function will be preserved. With isonitriles, we can selectively label or modify the biomolecule. We want to develop a method that can be used not only by chemists, but also by biologists and researchers in other disciplines.

Is having a potential application of your work important to you?
Yes, as a scientist you have to have some kind of long-term vision. I try to keep my eyes open and to always consider how the basic research project I’m working on could be put to practical use. This is probably my strongest suit.  So in this case I was looking for a topic that would allow me to use my knowledge of organic chemistry and at the same time to learn something new that might lead to scientific discoveries with a wide range of applications. And these are the criteria that my project meets. If we can conduct the reaction in cells or in the living organisms themselves, we will be able to really see what happens to the biomolecules in their natural environment. This might help us understand the mechanism of a disease and develop a therapy. Another application could be the selective delivery of medicines, the so-called click-and-release method. Of course, even though these are applications that I would like to see materialise, there is still a long way to go, and science often doesn’t quite work out the way we hope it will.

What methods will you use to study sugars or proteins in living organisms?
First, we will be looking  for a reaction that could work in living organisms. We will start in test tubes and attempt to imitate the cellular environment, meaning we will conduct the reaction in water. Then we will do the same reaction in the presence of the functional groups that we find in the organisms. Once we’ve got this working, we will use tissue cultures containing biomolecules with an embedded isonitrile functional group. Then we will use the reagent, illuminate the target site and allow the reaction to run its course. If it is effective enough, we would like to test it on living organisms, such as zebrafish or other model organisms. Ideally, at some point I would like to collaborate on this with my girlfriend, who is a developmental biologist working with model organisms.

You will be working on the project at ETH in the group of Professor Helma Wennemers. How did you come to choose ETH and this particular research group?
I met Professor Wennemers two years ago when she was visiting the IOCB in Prague. It was a unique opportunity to get to know each other: we had the opportunity to have lunch together and discuss both professional and personal matters. Even back then I was already thinking that her group might be the ideal next step for my scientific career. And of course ETH Zurich is one of the most prestigious institutions in Europe with a long tradition behind it and many world-renowned scientists to its name. I also wanted to stay in Europe so as not to be far from my friends and family.

What do you hope to learn during your research stay?
I would like to learn from Professor Wennemers how to improve my management skills. I want to learn how to lead a scientific group effectively while maintaining a high standard of research. From the process of drafting the project and from the job interview, I could see that she’s an extremely driven person. When she saw my original project, she said that the idea was great, but that the project itself was not as well written as it might have been, and she referred me to one of her postdocs, with whom I polished the project. It was a real learning experience for me. It taught me that when writing a project, you have to look for alternatives. There are many gifted young scientists in her group, from whom I’m sure I can learn a lot.

Will you be riding your bike in Zurich?
Yes, I’m taking my bike with me. But I also enjoy running to clear my head and recently I’ve really got into hiking in the mountains. 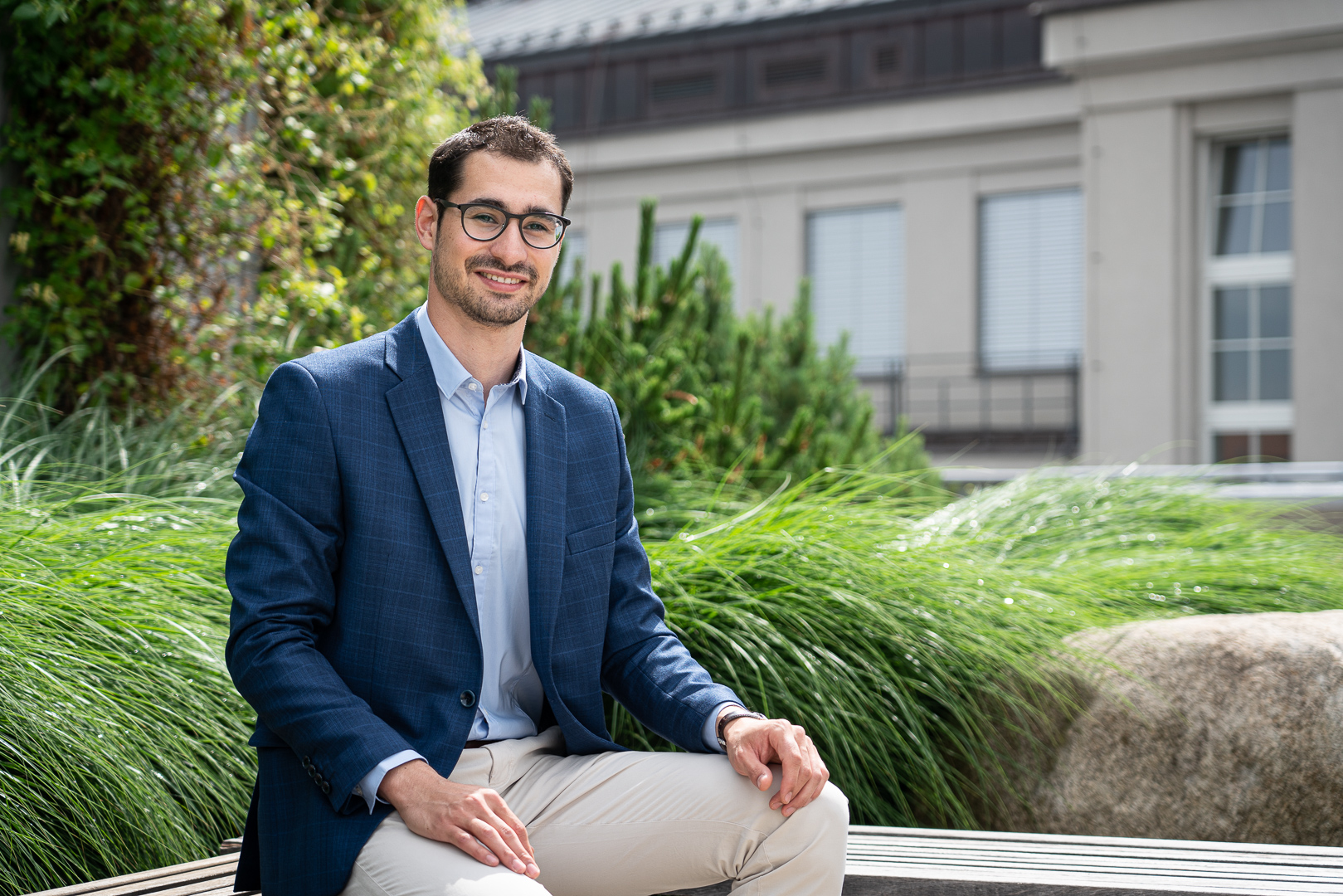 was born in 1993 in Zlaté Hory in Silesia. He graduated from the Sports Grammar School in Vrbno pod Pradědem and represented the Czech Republic in road cycling for several years. He then earned his bachelor’s degree in chemistry and biology at Palacký University in Olomouc and went on to receive his master’s degree in organic chemistry at the same university. He is currently finishing his doctorate under the supervision of Dr Petr Beier at the Institute of Organic Chemistry and Biochemistry of the Czech Academy of Sciences in Prague. Thanks to the Experientia Foundation’s CZK 1,420,000 stipend, Athanasios will travel to ETH in Zurich in September 2021, shortly after the defence of his PhD, to join Professor Helma Wennemers’ group for a postdoctoral research stay.