Our methodology opens up new ways of transforming natural products

An innovative idea that may change the current paradigm of organic synthesis. Michal Šimek, the 2022 Experientia Foundation stipend award winner, is planning to use radical cleavage to open up new ways of transforming common natural and synthetic ketones. Although the project itself does not target any specific disease therapy, its impact could be major: “Our methodology may have an impact on many areas of treatment, because it will help other scientists discover effective analogues of biologically active molecules,” explains the young scientist. Over the course of his year-long research stay in Professor Ohyun Kwon’s group at the prestigious University of California, Los Angeles (UCLA), Šimek will work to develop a method of modifying the ketone functional group to deliver novel types of compounds.

You’re soon headed to UCLA, one of America’s top universities. How does it feel?
I’m going to one of the most prestigious institutions in the world, to work with scientists who are at the very top of their field. It’s an incredible feeling and a huge commitment for me personally. I hope that I’ll fit in well at UCLA, both in terms of my expertise and overall approach, and that I will not disappoint.

Your project is entitled “Break it to make it”, which doesn’t translate easily into Czech…
It refers to the cleavage of the C-C bond [covalent bond between two carbon atoms, author’s note]. Organic chemists are usually in the business of forming these bonds, as that is how you transform simpler substances into more complex ones. However, these bonds are often already available in natural substances, so what we are doing is approaching it the other way round: we want to cleave the bond in the source compound, fragment it, so we end up with a new functional group. In this particular case, we’re talking about radical cleavage. The bond splits into two halves, and on one side we get a free electron (radical), which we can synthetically further transform.

Your project is focused on basic research, but what would you like to see in terms of its practical use?
I hope that we will establish a fundamental method for synthetic chemists to utilise when they want to transform their molecules. My motivation is not just to publish or have a good paper; what I would really like to see is our method being adopted by people all over the world, being used in the lab, and knowing it can be relied on. For example, our methodology may have implications for many therapeutic areas if other scientists can use it to discover effective analogues of biologically active molecules.

How did this original idea come about in the first place?
The original inspiration for my project was Professor Kwon’s 2019 paper published in the journal Science.  This was where she described the methodology for the first time, using it to cleave alkenes. I thought the same thing could be done with ketones. I contacted Professor Kwon, sent her my project, and received an immediate response. She forwarded me the grant proposal she had submitted in the US, and it was essentially the same as what I had proposed. She even used exactly the same molecules in her description of the method! At that moment, we realized that we would get along and started to develop the project further. I approached several laboratories in the US, but the methodology used by Professor Kwon’s group was the most similar to what I wanted to do.

Were you always certain that you wanted to go to America?
Yes, I knew that the US would be the best move for my career, because the work environment there is so different. I’d like to find out why California is right on the cutting edge technologically, what makes it so successful. I don’t think people there necessarily have better ideas than they do here, but I think they have a different approach to work, and they really only publish the best projects.

What would you like to learn during your stay?
I’m looking forward to improving my soft skills, and improving my English. I would like to set up my own group one day, so I’m also very interested in how research groups are run in the US. Another thing is that transition metal catalysis is a big part of my project, and that is a type of chemistry I have basically never done before and would like to learn more about.

You’re passionate about rock climbing. California is kind of a climber’s paradise, isn’t it?
Yes, when I’m not in the lab, I’m out climbing or practising difficult climbing routes – it’s a real challenge and I do enjoy it. California is full of national parks with amazing rock formations. There’s Yosemite National Park with the famous El Capitan, possibly the largest rock monolith in the northern hemisphere. People from all over the world go there to climb, and I’ll be living within driving distance. But it’s not just Yosemite, there’s a whole range of other parks just 20 minutes from Los Angeles.

Do you think that your achievements in science are also thanks to climbing, at least to some extent?
Climbing is an amazing sport to clear your mind: you really switch off. When you’re climbing on sandstone, high above the ground, without ropes, you have to stay absolutely focused. At that moment, you forget about any work-related stress. I see a lot of parallels between climbing difficult routes and solving challenging chemistry projects. If you want to climb a difficult route and do it without falling, you have to be able to handle the psychological pressure. If you fall in the same place thirty times, it’s very similar to doing thirty experiments in total synthesis and still failing to get the result you want. In both cases you have to persevere, to improve a little more. It teaches you perseverance and mental resilience.

Speaking of parallels, is chemistry also a passion for you?
Chemistry has always fascinated me. I was mixing shampoo and shoe polish in the sink even as a child. My father runs a company producing circuit boards, which also has an analytical laboratory. When I was seven years old, I remember hanging onto the skirts of the lab technician, making solutions change colours with her, which I enjoyed immensely. But then I went to a high school that specialised in languages and forgot about my love for chemistry for a while. I didn’t rediscover it again until university. The turning point came when I got into organic chemistry. Thanks to both of my supervisors, Associate Professor Veselý and Dr. Jahn, I found that organic chemistry is very close to my heart.

What fascinates you about organic chemistry?
When you have a pure organic substance, a beautiful crystalline substance in a vial, labelled with a sticker, you get this strange tickle, it’s fascinating. And it’s actually kind of like LEGO. We put the molecules together, and sometimes a piece doesn’t fit, so we try to change it, and when everything finally falls into place, it just feels great.

What does it mean to you personally in terms of your career that you received the Experientia Foundation grant?
It means a lot because there are not that many people who have got it. I find it amazing that through my own hard work, I was able to join this elite club of people who have travelled to the top international research centres with the support of the Experientia Foundation. I’m really grateful for the opportunity.

Do you have a message for others interested in our stipend award?
That they should aim for the most prestigious research institute they want to go to, no matter where it is in the world. They should find a lab that does exactly what they’re interested in, so they are truly motivated. And there’s no need to be afraid of the process, because Experientia is unique in that its grant application is not complicated – it’s just a four-page project description, and the administrative burden is essentially non-existent. I really enjoyed the whole process: from submitting the grant application to the anticipation of what happens next. The second round of the application was also a very pleasant meeting, and I had a very good feeling about it when it was over. In my case, it was very helpful that I was clear in my mind why I was going to that particular institution, what I wanted to achieve there, and why I was doing it all in the first place. 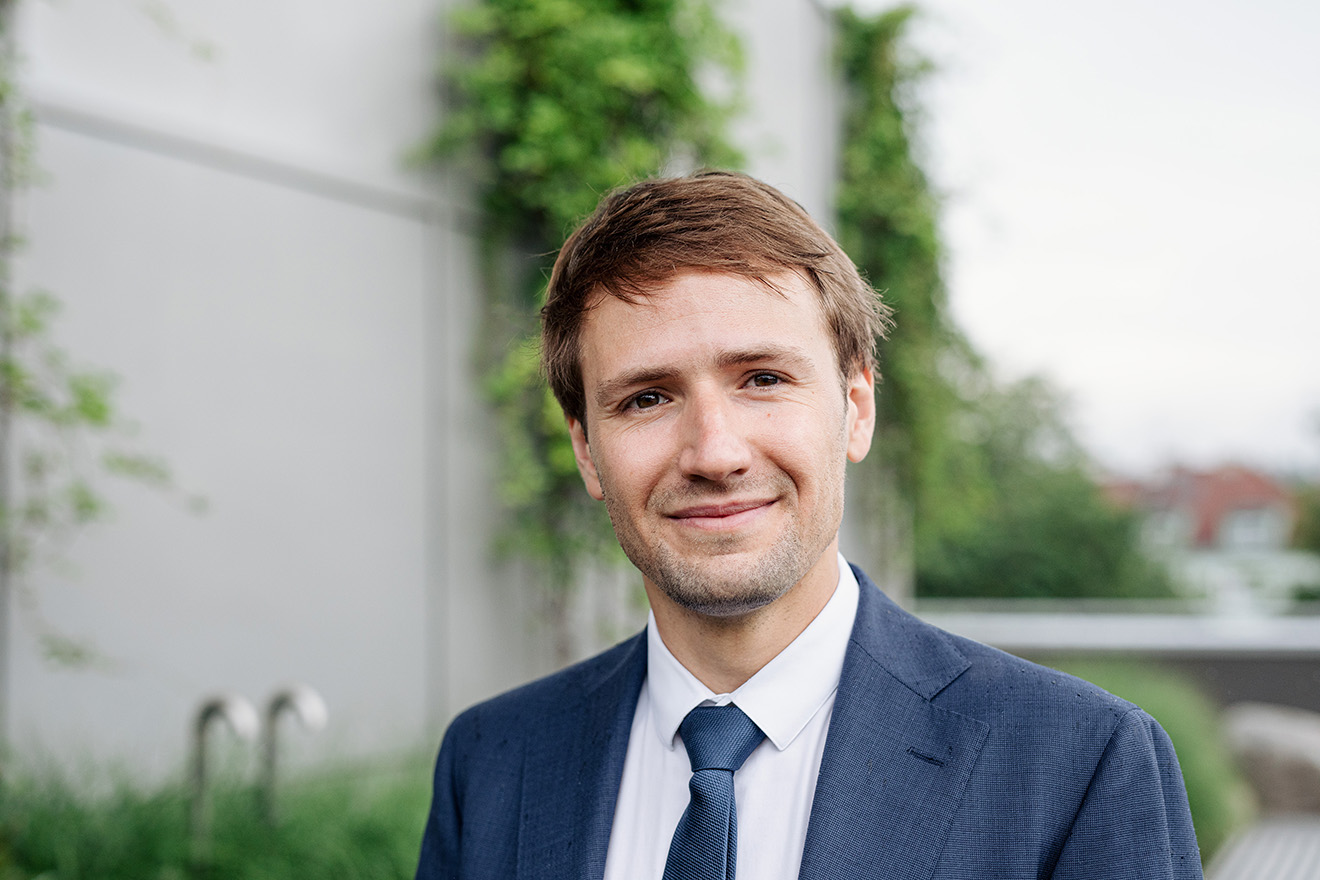 was born in 1989 in Prague. He graduated in chemistry from the Faculty of Science of Charles University (Bachelor’s degree in Chemistry in Natural Sciences, Master’s degree in Organic Chemistry). In May 2022, he completed his Ph.D. under the supervision of Dr. Ullrich Jahn at the Institute of Organic Chemistry and Biochemistry of the Czech Academy of Sciences (ÚOCHB AV ČR), where he worked on the development of radical methodologies and the synthesis of fungal metabolites. Thanks to the stipend award from the Experientia Foundation in the amount of CZK 1,560,000, Michal will travel to the University of California, Los Angeles (UCLA) in July 2022 for a one-year research stay as a member of Professor Ohyun Kwon’s research group.