“Science has no boundaries. If you look around and keep your eyes open, you can come up with ideas that reach into completely new scientific disciplines, and that’s one of the things I love about science,” says Petr Kovaříček, head of a new research group to be launched at the University of Chemistry and Technology in Prague in January 2021, which has been made possible by the Experientia Foundation’s Start-Up Grant. The group’s research topic will be a new approach to catalysis (accelerating or enabling a chemical reaction to take place – author’s note). “The project is at the intersection of organic chemistry – the self-organisation of molecules, which I worked on during my PhD – and materials chemistry – the chemistry of surfaces, which is the topic I am focusing on at present,” Kovaříček explains.

You have just become the second ever award holder of the Experientia Foundation’s Start-Up Grant. What does this mean for you?
It means a lot, on several levels. First, it is a great honour for me personally. The story of Hana and Dalimil Dvořák and their Experientia Foundation is amazing – almost unbelievable. I consider it a very prestigious grant, especially because only one is awarded every year. Then, from a pragmatic point of view, the grant gives me the freedom to take full responsibility for my own research.

Was it always your dream to have your own research group?
Let’s say it was a long-term plan of mine. As early as my PhD, I began thinking that one day I would like to set up my own group.

And the University of Chemistry and Technology in Prague was the obvious choice?
The UCT is my alma mater. After I finished my studies, I spent five years abroad, enjoying a czexpat’s life. However, my family responsibilities finally brought me back home, and in the Czech Republic the UCT was the obvious choice.

You earned your PhD in the laboratory of Nobel laureate J. M. Lehn at the University of Strasbourg in France. How did you end up there?
My diploma thesis supervisor at the time told me: “If you want to continue in supramolecular chemistry, then do your PhD under the best.” So I wrote to a Nobel laureate. When I hadn’t had a response after four months, I started looking further, trying to get a post in another lab. That lab wrote back with some annoyance, asking why I was asking to join them when I was about to start with Jean-Marie Lehn. So I wrote to him again, and this time I got my confirmation. I learned that J.-M. Lehn had been asking for my personal references in the other lab.

What was it like to work under the supervision of a Nobel laureate?
In a word, great. Jean-Marie Lehn is an amazing person. I had regular meetings with him almost every week, often late at night or at the weekends. The sessions were long, lasting 5–6 hours at times, but left me feeling positively charged and wanting to go back to the lab and try out the new reaction despite the lateness of the hour.

You lived abroad for a total of five years. What did you get out of it?
A great deal! Living abroad is a massive experience that stays with you for the rest of your life. As far as the science was concerned, it was unbelievable, having the opportunity to discuss my work with a Nobel laureate on a weekly basis. On a personal level, I learned a lot about myself. It was a challenge. The French language itself, for example. You have to find accommodation for yourself, open a bank account in a language you can barely understand.

How did you find it to come back to the Czech Republic, to the J. Heyrovsky Institute of Physical Chemistry of the Czech Academy of Sciences?
It was a shock to the system – for example riding a tram I could suddenly understand everyone, everywhere, and everything. But joking apart, from the point of view of the science, it was also a leap. Until then, I had mainly focused on organic chemistry and complex synthesis, and here I was joining a group that investigates materials, which involves a lot of physics. At first, I had no clue what the seminars were about: I had to study a lot to be able to communicate and function in the group at all.

What topics have you worked on until now?
The projects I worked on during my PhD were very abstract. We were trying to get molecules moving in a manner in which one molecule “walks” along another, which we then “translated” into the language of chemical bonds and molecules. So whenever we were asked the question “what’s this good for?”, it was difficult to give an exact answer, even to fellow chemists. With materials, it’s much easier. Everyone understands if you tell them that we produce new materials for electronics, for example.

In January 2021, you will be launching your own research group at the UCT in Prague. Do you already have a name? What will you be working on?
No, I don’t have a name yet: I’ve only known that I was successful with the grant for about three weeks. The project involves searching for a new approach to catalysis, which is a broad field offering many possibilities. Thematically, the project is at the intersection of organic chemistry – the self-organisation of molecules, which I worked on during my PhD – and materials chemistry – the chemistry of surfaces, which is the topic I am focusing on at present.

Why do we need new catalysts?
Today’s industrial catalysts have a precisely defined composition and catalyse specific reactions under fixed conditions – otherwise they do not work. In contrast, natural catalysts – enzymes – can catalyse reactions with tremendous selectivity even within an incredibly complex environment. For example, within a cell, an enzyme only selects what it needs for the reaction, and then does what it is supposed to do. I would like to take this approach to create catalysts which we could use without having to know the specific conditions of catalysis in advance.

How would that work?
Think of a sort of chemical soup that contains multiple different molecules. The catalyst would be able to find what it needs from the soup by itself, and would catalyse the reaction. This would also allow us to catalyse new reactions as well, because we wouldn’t have to know the conditions of catalysis in advance – they would be established retrospectively.

How?
Imagine pouring the soup onto a plate – onto a surface with the required gradient, which is like a hidden potential energy. Then, when I apply a stimulus, such as light, I change the distribution of the individual components of the soup. Once a catalytic layer has formed through self-organisation, we can wash away everything around it, leaving only an active surface that has the ability to catalyse.

In the language of chemistry, we will investigate organic molecules that, when they are stimulated by light of a certain wavelength, have the ability to self-organise and create a surface that is electrically polarised, changing the redox state of the surface molecules, thereby activating them for catalysis.

So, going forward, we could have this sort of universal chemical soup to which we add substances for the reaction we want to catalyse, and the system will then find a suitable catalyst for itself?
Yes, that is how it could theoretically work. It would be a kind of library of molecules from which a suitable catalyst for a specific reaction could quickly be found. But at present, we are at a very early stage. We are doing basic research, and very innovative and ambitious research at that. I’m not aware that anyone is trying to do anything even remotely similar to this.

You have received funding for three years from the Experientia Foundation and the UCT. What are your expectations? What would you like to achieve in that time?
Three years is a relatively short time in science. In many ways, I’m starting from scratch. If I manage to build a functioning group which can secure additional funding and is able to carry on with the research, that will count as a success for me. From a scientific point of view, I hope we are able to formulate answers to the early conceptual questions and set the direction of further research.

I ENJOY THAT SCIENCE HAS NO BOUNDARIES.

What do you enjoy about science?
That it has no boundaries. I like the well-known Star Trek quote, “Space, the final frontier.” And as far as we know today, the Universe is infinite. Knowing something is like a circle that has a circumference. Knowing more is a larger circle with a larger circumference and so on. So the more you know, the larger the boundary with the unknown is. Science has no national borders. There is no such thing as Czech science. Science is only good or bad. There are no boundaries between disciplines either – the fact that we classify chemistry into inorganic and organic is of utmost indifference to the atoms themselves. If you look around and keep your eyes open, you can come up with insights that reach into completely new scientific disciplines, and that’s one of the things I love about science.

What was your path to chemistry?
It was rather straightforward in my case. Both my parents are chemists, having graduated in food processing from the UCT. And organic chemistry won me over because it’s infinite. I am fascinated by the diversity of carbon, by how many different substances it can form, how they interact with each other. That is simply beautiful.

What would be your advice to students considering a scientific career?
You have to enjoy it. You can’t do science in the long term just because someone at some point advised you to do it. If you know that you do enjoy science, it is essential to go abroad, preferably several times, and to different places. Another piece of advice is not to be afraid. If I had been afraid, I would never have written to the Nobel laureate, would never have been awarded this grant, and so on. And the last piece of advice – keep your eyes open, look around and learn.

What do you do for fun outside of research?
These days, I spend my free time mostly with my family. But I also enjoy music accompanied by acting, such as stage dancing or opera. But as a spectator only – you don’t want to hear me sing! My wife and I are also into gastronomy – trying out new dishes, new flavours. Our vacations often revolve around food. And I personally enjoy molecular gastronomy, which is a marriage of chemistry and food brought to perfection. 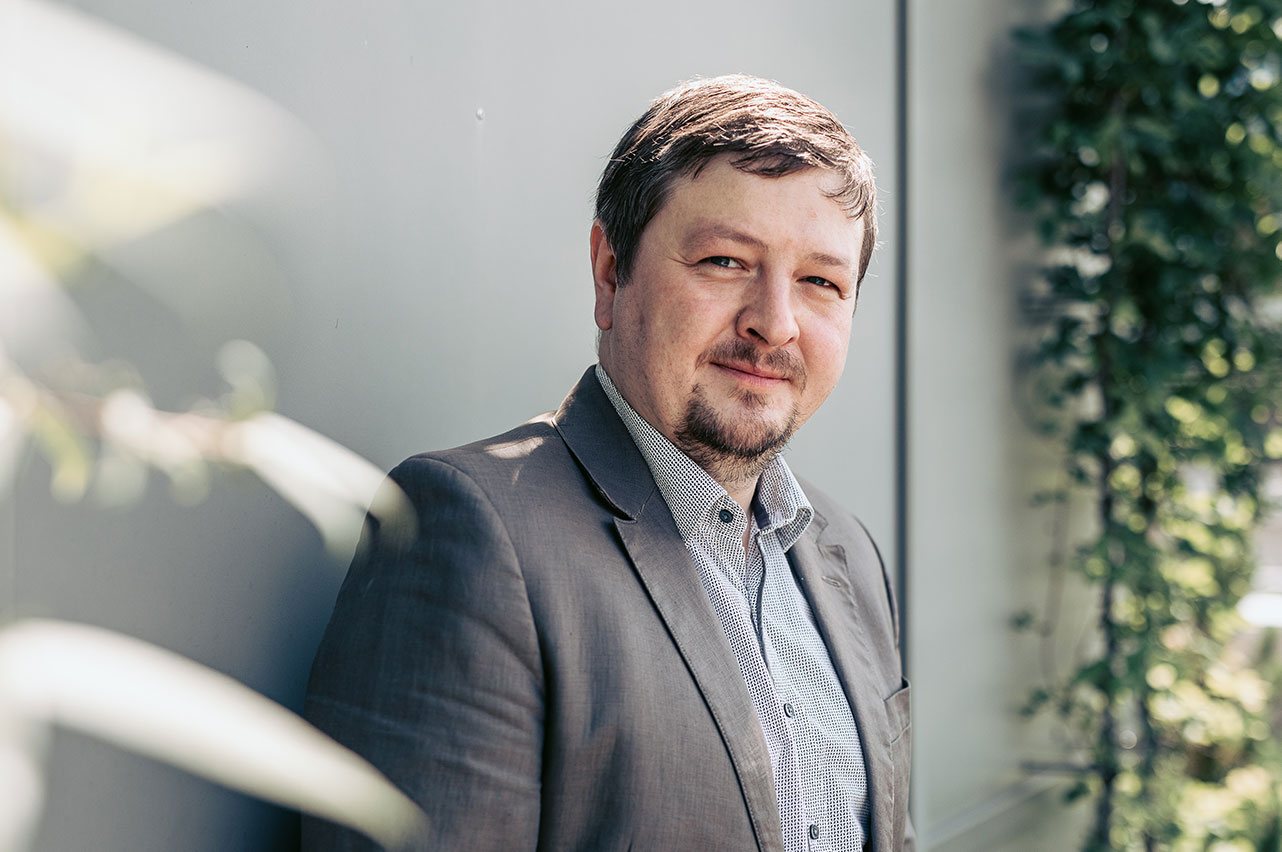 Petr was the second ever scientist to receive the Experientia Foundation’s Start-Up Grant. In January 2021, Petr will launch his own research group at the University of Chemistry and Technology in Prague, specialising in the development of new catalysts. The Experientia Foundation will support Petr’s group with 2 million CZK a year for a period of three years, boosted by another 0.7 million CZK funding per year from the UCT itself. Petr graduated in organic chemistry from the University of Chemistry and Technology in Prague and earned his doctorate in the laboratory of the Nobel laureate J. M. Lehn at the University of Strasbourg in France. As a postdoc, he worked at Humboldt University in Berlin in the group of Professor S. Hecht. He currently works at the J. Heyrovsky Institute of Physical Chemistry of the Czech Academy of Sciences. He has two children.