C-H activation is the “holy grail” of synthetic chemistry

C-H activation, to which our scholar Vladislav Kotek dedicated his year-long stay in Prof. Lutz Ackermann’s research group at Georg-August University in Göttingen, Germany, is a modern, dare we say “trendy”,  chemical reaction. This can be documented by data from a database of scientific articles on Web of Science: between 1991-2005, the number of papers dealing with C-H activations ranged from 200 to 500 annually; it leaped in 2009 when it exceeded 800. In 2017, the number of C-H activation citations reached 2,325.

C-H activation is very popular for a very simple reason: an initially unreactive carbon-hydrogen bond may be activated, and thus forced to react. The result is a C-X bond, where X is carbon or heteroatom such as oxygen and nitrogen. In general, this reaction usually catalysed by transition metal complexes (such as iron, cobalt, nickel, copper, palladium, or rhodium), is used on alkanes readily available due to their prevalence and price, to prepare more useful substances – functionalised organic molecules or, for example, analogues of natural products and other biorelevant compounds.

Selective C-H activation is a major challenge and is therefore often called the “Holy  Grail” of synthetic chemistry. C-H activation is not only applicable to alkanes. The selection of parent substances is not limited in any way. They can even be complex organic compounds containing carbon-hydrogen bonds and these make up the majority of the known about 100 million chemical substances nowaday. The activation of a C-H bond is attractive for organic synthesis as it follows the concept of atomic economy, particularly when compared with the cross-coupling approach, which usually requires additional synthetic steps (including the use of protective groups that are later removed from the molecule), and generally starts from more complex structures. This modern approach often capitalises on an effect of a coordinating group. It can thus influence the reactions that take place even in more distant parts of the molecule.

Dr Kotek tried to develop ligands for the meta–selective ruthenium–catalysed functionalisation of sp2 carbon aromatics. The original idea was to use a reversible hydrogen bond for this purpose. However, this proved to be an extremely complex task. On the other hand, he was able to achieve the introduction of alkenyl groups into amide arylacetic acids to form an ortho–alkenyl product. The reaction was catalysed by a ruthenium complex controlled by an amide group. In this context he also studied the influence of the presence of electron acceptor / electron donor groups on the reaction. In addition, Dr Kotek conducted experiments with C-H borylation using Lewis acids.

In summary, Dr Kotek’s experiences are invaluable. In addition to the fact that he could work in a leading research group among extremely talented and ambitious individuals, he learned an entirely new approach to thinking and experimental procedures. He particularly appreciates the fact that he had the opportunity to study in depth the mechanism of the above-mentioned C-H activations, which belong to the most modern and advanced methods of organic chemistry. 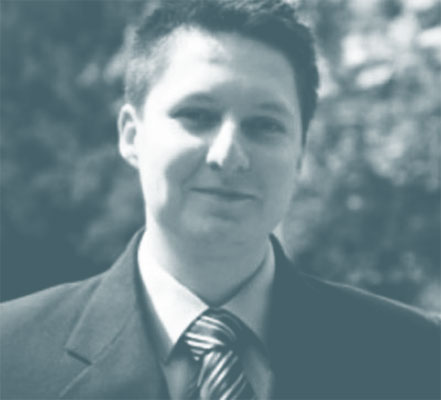 Received his PhD from the University of Chemistry and Technology in Prague, Czech Republic. Thanks to an Experientia Foundation grant in the amount of CZK 742,000, he  could join the group  of Professor Lutz Ackermann at Georg-August University in Göttingen, Germany, from 2014 to 2015, where he focused on studying controlled C-H activation.